A couple of economic milestones passed this week that may be of interest to home owners/buyers/sellers.

On Wednsday the Federal Reserve raised interest rates for the third time in 2017 (as was generally expected) to a range of 1.25% to 1.5%. This change, which will mean higher rates on some mortgages, indicates confidence in the strength of the economy and getting rates to normal levels. The Fed is anticipated to raise rates three more times in 2018. As you can see in the graph below, we are still much lower than pre-recession levels: 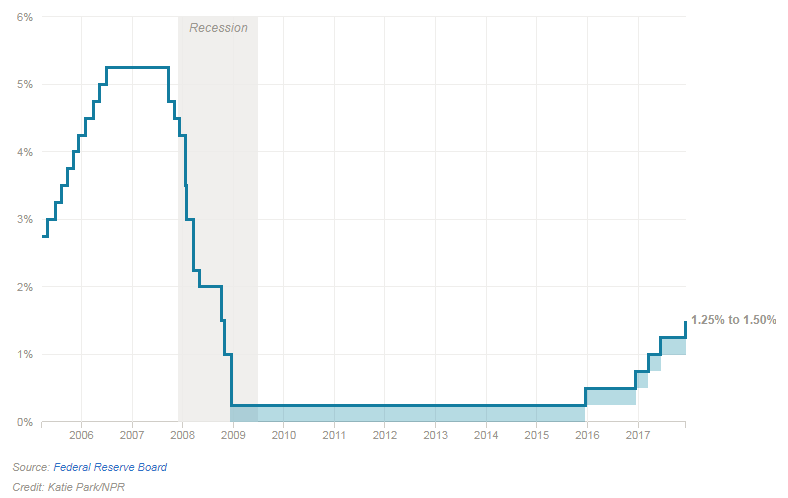 This move by the Fed will likely impact mortgage rates by 25 basis points in the near future. While rates are still at historical lows, the average rates today are:

Don't forget that these rates will change from one lender to another and will depend on credit scores, origination points, closing costs and other factors.

If you need help with a mortgage, we know some terrific loan officers we can refer you to! Just Contact Us!

This one is a little more complicated, folks. Mostly because there hasn't been a final decision or bill signed into law yet. And before we go any further, we just want to urge you to contact your accountant or tax adviser before you make any decisions.

The House and Senate have now each passed a different version of the new tax bill called the Tax Cuts and Jobs Act. What this means is that both sides of Congress now need to figure out a way to come to a single unified law and that is done through a Conference Committee. Most of the discrepancies revolve around timing and limits.

Both bills already agree on the new standard deduction, which will impact most taxpayers. Today the deduction for single/married people is $6,350/$12,700 and it will be raised to $12,000/$24,000. What this means is that if you fall under that limit you won't need to itemize your deductions at all and just take the standard deduction. Today only 30% of households itemize their deductions and this move will bring that number down to around 10%.

Both bills also agree on repealing the State and Local Tax Deduction (SALT) and putting a cap of $10K on property tax deductions. Today, income or sales and property SALTs are fully deductible for those who itemize. However, with the new higher standard deductions this new cap may not even make a difference.

One item that is still being negotiated and will affect home buyers is the cap on the Mortgage Interest Deduction (MID). Today the MID is capped at $1 Million and that's the way the Senate wants to keep it, while the House wants to reduce it to $500K. Congressional aides say negotiators have agreed to scale back the MID and cap it at $750K but we won't know for sure until the dust settles. This should apply only to new mortgages and not current mortgages.

The Estate Tax that today stands at 40% on assets over $5.49 Million may be repealed by 2024 and will immediately double the asset limit.

Corporate Tax Rates will be coming down from 35% to 20% either immediately or over the next two years and there will also be changes to "Pass-Through" Tax Treatments. Today this kind of income is taxed at the regular personal income tax rates, but in the future may be capped at 25%. This is extremely significant for business owners and corporations because it allows for a much lower tax liability.

There are some other very important changes that will apply to the Child Tax Credit (going up), repealing or keeping the Alternative Minimum Tax (AMT), Education, Healthcare, Expensing of New Equipment, Individual Tax Rates, International Tax Rules and many others.

To summarize, you can see that there are many changes that may or may not impact every taxpayer. And we still don't have a definitive answer, although the Conference Committee plans to put a unified bill for the President to sign into law before the end of the year.

Once again, we urge you not to make any rash decisions and consult with your accountants and tax advisers.